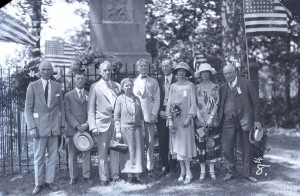 As KHS prepares to host another Boone Day Celebration, we love to remember previous celebrations. However, when looking at this photo, purported to be an image of the 1925 Boone Day Celebration, new facts came to light. In 1925, Boone Day was postponed until the following week because of a competing event that also celebrated the life of the famed pioneer. Apparently, the year before, in the summer of 1924, the Boone Family Association was newly formed. As an act of honoring their famed ancestor, the decided to host a family reunion of sorts in 1925 at Daniel Boone’s grave in Frankfort Cemetery. On June 4th, the scene was described by a reporter from the Frankfort State Journal Newspaper:

“”The ceremony started with a parade from the new capitol to the grave of Boone in the State Cemetery. It was imposing. A troop of cavalry, under the command of Captain John Fuss, led the way, followed by automobiles bearing the governor of the state, William J. Fields, and the members of the Boone Family Association, of which Mr. William Boone Douglas, Washington D.C., is president. These were followed by machines containing the state officials and citizens who desired to join in the tribute to the memory of the greatest pioneer in the history of the Commonwealth” Register of the Kentucky State Historical Society, Vol. 23, No. 69, pg. 265-266.

As you can see from the photo, a select number of dignitaries have posed in front of Daniel Boone’s grave, surrounded by flags and flowers. According to another source, the only people we can conditionally identify are: William Boone Douglass and Alvira Luckett Douglass – pictured third and fourth from the left. Hazel Atterbury Spraker – third from the right. Mrs. Spraker was an author who wrote “The Boone Family” in 1922.

We would love to be able to put names with faces for all of the people posing in front of the grave, but to do that, we may have to appeal to a nation-wide audience. If you look closely, many of the people standing there are wearing ribbons with “Missouri” or “Boone Family” attached to their lapel/dress. Since we know that many of the attendees and BFA officers were from various states, they could have come from very far away! It was also reported that while most of the attendees were members of the Boone family, only one was a direct descendant of Daniel Boone himself: Jesse Procter Crump from Missouri. Is Mr. Crump among the people in this photo? Was the report wrong? Were there others who could trace descent from Daniel Boone? Many questions come to mind when considering this wonderful photo from the Wolff Gretter Photographic Collection. If you can provide any further information about the event or attendees, just let us know! To read more about the event, the above mentioned issue of the The Register contains two newspaper accounts that are quite charming.

For additional fun and sleuthing, here is another photo in the collection of this event (the only other one we can find), but as you can see, it is heavily damaged. In the faint image, can you recognize any familiar faces? (Click on the image to see a higher resolution) 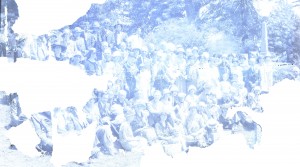 free sample merely need to remember that the that nothing will betray.