For the first time in 20 years, the state of Kentucky will once again play host to the Taylor Family Reunion, September 5-6 in Richardsville and Bowling Green. The family lineage behind this event is long and well documented throughout the United States and beyond. For anyone with Taylor family roots, be sure to check out the lineage information below to see if you connect to this family that has resided in the Bowling Green area for over 200 years.

Festivities are set to begin this weekend, Friday September 5th, in Richardsville at the Community Center from 10:00 a.m. to 6:30 p.m. On Saturday, September 6th, the events will move to Bowling Green at the LDS Church from 8:00 a.m. to 5:30 p.m. A final event with cemetery hayride tours and BBQ will take place back in Richardsville from 5:30-9:00 p.m. (Saturday.) There are several activities planned with an aim to gather and share family trees and stories, featuring FindMyLink through FamilySearch.org. To access the full agenda for both days, please download HERE: TFA Reunion Agenda

If you have heard of any Taylor ancestors hiding in your family tree, it is well worth your while to look at the Taylor family history. The clan is quite large and has been documenting the various branches for decades, under the organization of the Joseph Taylor Sr. Family Association. Some other associated families include: Cherry, Wallace, Upton, Smart, Hudnall, Goode, White, Stahl, Young, and Runner. Below is a brief outline of the first generations after Joseph Taylor Jr. (c.1751-1819) first came to Kentucky:

“The father of the family who moved to KY was Joseph Taylor Jr. and his wife Sarah Best.  Joseph was born about 1751, and we’re not certain if he was born in the Norfolk area of VA or in North Carolina.  (His father, Joseph Taylor Sr., was on the western branch of the Elizabeth River in 1750 and 1751 (Va tithables), but by 1756 he was in the Tyrrell/Martin/Edgecombe County area of North Carolina, applying for a land grant, which he finally received in 1760.) 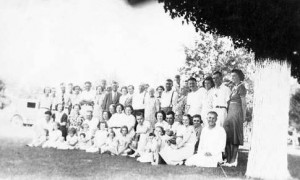 Joseph Taylor Jr. enlisted in the Continental Army in 1776 and served into 1779.  Then after a brief respite at home, he joined the North Carolina militia and served as a gunsmith/private for the remainder of the war. We know he was wounded in the Battle of Guilford Courthouse, possibly a head wound.  We wish we knew more about his service.

In about 1782, he married Sarah Best, the daughter (we think) of Thomas Best.  She isn’t named in his will, but she could have been his oldest child and married for some time by the time he made his will.

He farmed with his father in North Carolina until the move to Kentucky.  His own children moved with him and their spouses (for those who were married), plus stock, equipment, etc.  We believe he came overland because one of the stories that has been passed down is of the women saying their skirts were stained with berries along the trail, because the trail was very narrow.

#1  Frances “Frankie” Taylor (born 1783 in Martin Co. NC), married William B. Cherry, a widower.  He had 7 children by his first wife, Lottie Hopkins, and then he and Frances had 10 children…. possibly 11…..  He died in Warren County in 1828 and Frances died in 1852.  Henry Hardin Cherry, the founder of what became Western Kentucky University, was a descendant.  Their descendants are not certain where they are buried.

#2  Amy Taylor (born 1784 in Martin Co., NC), who married Etheldred Wallace.  They went to TN and didn’t live in Kentucky, as far as I know.  He was an attorney and represented Joseph Jr. in some legal matters in North Carolina after Joseph left the area. They had 8 children.  Amy died about 1865 in Stewart County, TN, in the Bumpus Mills area and is probably buried in a cemetery on Hays Fork Creek.

#3  Delilah Taylor (born 1786 at Martin Co., NC), who married John Wallace, a younger brother of Etheldred. They had 10 children. They appear on the 1810 Warren Co., KY census.  They moved to Stewart County, TN about 1818, where many other Wallaces had settled.  About 1830 they moved to Trigg Co., KY and they appear on the 1850 census there.  Both Amy and Delilah were members of the Saline Creek Baptist Church in Stewart Co., right across the state line from Trigg Co.  The church records Delilah’s death as 1851.  John does not appear again and we think he may have died in a smallpox epidemic in 1853.  We don’t know where they are buried.

#4  William Taylor (born 1787 at Martin Co., NC), who married Elizabeth Patrick in 1811 in Warren Co., KY.  He moved into Missouri in 1831, probably needing more land to support his 14 children.  In Missouri, they met members of the Church of Jesus Christ of Latter-day Saints (the Mormons) and were converted. When Missouri Governor Boggs issued his infamous Mormon extermination order, the Taylors had to cross the state from Independence to the Mississippi and cross to Illinois.  There William died in 1839 along the road to Nauvoo, the next gathering place of the Mormons.  Elizabeth continued on to Nauvoo, and then when the Mormons were expelled from Nauvoo after the death of Joseph Smith, she and all her children moved to Iowa, and then eventually to the Salt Lake Valley.  William is buried in a pioneer cemetery in Illinois.  Elizabeth is buried in Ogden City Cemetery, Utah.

#5  Allen Taylor (born 1789 at Martin Co., NC) married LaVina Cherry in 1811 in Warren Co., KY. They had 12 children. LaVina was a daughter of William B. Cherry by his first wife, Lottie Hopkins.  LaVina died in 1853, and Allen died in 1878, both in Warren County.  They are both buried in the Taylor family cemetery, on land originally owned by Joseph Taylor Jr.

#6  Mary Ann Taylor (born 1791 at Martin Co., NC) married Samuel Cherry in 1813.  He was also a child of William B. Cherry and his first wife, Lottie Hopkins.  He died young. They had 1 child.  Mary Ann then married Elijah Upton, a widower in 1826.  They both died in Warren Co., KY.  She and Eljah were both buried in the Taylor family cemetery.  Not sure where Samuel Cherry is buried.

#7  Seraphy Temperance Taylor (born 1793 at Edgecombe Co., NC) married Wiley Smart in 1813 in Warren Co., KY. They had 9 children.  She and Wiley moved to Madison County, Illinois about 1816 and they both died there, “Tempey” in about 1843. She was probably buried at a Smart family cemetery in Madison County.

#9  Sarah Best Taylor (born 1800 at Edgecombe Co., NC) married Rene Chastain Hudnall in 1821. They had 10 children.  Rene’s mother was Rhoda Chastain, a direct descendant of Dr. Pierre Chastain, an early French Huguenot.  (Rene should have an accent over the final e but I can’t figure out how to do that with e-mail.)  Sarah died in 1837 in Warren County and is buried in the Hudnall Family Cemetery, near Richardsville, Warren, KY.  Her husband Rene was usually referred to as Ren.

#10  Joseph Best Taylor (born 1801 at Edgecombe Co., NC) was the third boy in this large family. He married Polly Ann Hudnall, the sister of Rene Chastain Hudnall. They had 11 children.  After Polly Ann’s death, he married a widow, Sarah Rone Burchfield, and they had 2 children.  He died in 1864 in Warren Co., KY and is buried in the Hudnall Family Cemetery, next to Polly Ann.

#11  Elizabeth Ann Taylor (born 1803 at Edgecombe Co., NC) married in 1829 Samuel Venable Goode, who was descended from two prominent early families, the Venables and the Goodes. They had 9 children.  She died in 1861 and is buried in the Mt. Zion Church Cemetery, Warren County, KY.

#12  Charlotte Taylor (born 1805 at Edgecombe Co., NC) married in 1823 in Warren Co., KY, William Lawson White (known as Lawson). Her father, Joseph Jr., wrote his will in 1815, when Charlotte was 10 years old, and referred to her as Charlotty. She was also known as Lottie.  She and Lawson were the parents of 12 children. She died in 1867 at Warren Co., KY and is buried at the Maxey Cemetery, nr. Riverside, Warren, KY.

Joseph Jr. died in March 1819.  Sarah Best Taylor, his wife, died probably in December 1836.  They are both buried in the Taylor Family Cemetery.”

To access a past issue of the Taylor Family Association Newsletter, detailing their accomplishments as an organization, click HERE. TT Vol 17 No 3-1

free sample just need to remember that the that nix wish betray.