In July 2011, the Jackson family, descendants of three brothers (Jordan Carlisle Jackson, Jr., Edward W. Jackson and John Henry Jackson and their uncle, Edward C. Jackson) held a reunion and visited four locations in Kentucky to connect with their family history. Despite the fact that the brothers and their uncle were born as slaves, the Jacksons were tenacious in their quest to educate themselves and their families and to lift up less fortunate members of society. They overcame racial and economic barriers to become leading citizens, business men and women and advocates for education. This article will focus on the contributions to the Commonwealth of Kentucky by E. Belle Mitchell Jackson, her husband, Jordon Carlisle Jackson and his brother, John H. Jackson and the recent contributions from their living relatives. 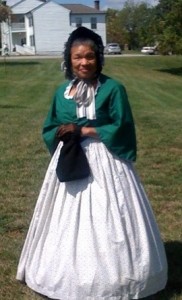 E. Belle Mitchell was born a free person in Boyle County in 1848. Many are familiar with stories of men of the Civil War, but the female contribution to this conflict and related activities are often overlooked.  E. Belle Mitchell who came to Camp Nelson at 18 to teach the women and children of African American soldiers how to read and write. Her encounter at Camp Nelson was recorded in “A Practical Recognition of the Brotherhood of Man, John G. Fee and the Camp Nelson Experience.”  [1]

White teachers were brought in by the American Missionary Association and the Western Freedmen’s Aid Commission to teach the slave women and children. Rev. John Fee had met Belle Mitchell at her church in Danville and he was impressed with her religion, fair education and good parentage. She had studied to be a teacher in Xenia, Ohio. Rev. Fee made a request to her parents to take Belle to Camp Nelson “to test the caste question amongst the white teachers at Camp Nelson and set a precedent of giving positions to colored persons as fast as prepared for such.” [2] Mr. and Mrs. Mitchell consented to the arrangement and understood the dangers of this situation. They had instilled in Belle a strong sense of Christian duty and responsibility for those less fortunate.

Belle and  Rev. Fee, the Superintendent of the Refugee Camp at Camp Nelson made the trip to the Camp. Upon arrival he assigned Belle a room in the dormitory  and put her in charge of a class of students.

Concerning her arrival, he wrote: 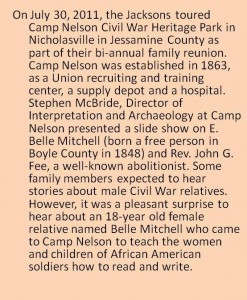 “At the dinner hour: I gave to her in the common dining-hall a chair and place at the table at which I presided. The presence of this young lady at one of the several tables in the common dining-hall produced such a sensation. A chaplain to one of the regiments, whose home was down in Main (Chapin), together with some army officials also boarding at the hall, protested against this young woman’s eating in the common boarding hall.  All the lady teachers (white) sent there by the American Missionary Association and the Freedman’s Aid Society, refused, with two exceptions (Mrs. Colton and her daughter, Anna Smith), to come to the first tables whilst the young woman was eating…..”[3]

“Colonel Jacques had sent Belle Mitchell, Mrs. Colton and her daughter Anna Smith out of the Camp. By Jacque’s order, Rev. Fee was no longer the superintendent and his post was given to Ann Williams. Rev. Fee filed a report to the American Missionary Association and it later conducted its investigation. It sent a committee to the Camp and required all the teachers “to sign a paper declaring they would not make complexion a condition of association among teachers.” [4]

“Belle returned to Danville for a short while and then went to Lexington to teach in a First Baptist Church school. The class started in the fall with twenty-seven students, by November, it averaged sixty-nine, and by March had ninety-five students enrolled.” [5] 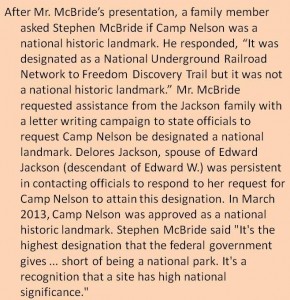 Following his passion for racial equality, Rev. Fee founded Berea College in 1865 as the first integrated school in the South. It was also unique for being bi-racial with both male and female students.  Many of the Camp Nelson refugees and soldiers moved to Berea and either attended Berea College or started farming and businesses there.  In 1867, Belle entered Berea College to complete her education. In 1871, Belle left Berea to marry the love of her life, Jordan Carlisle Jackson, Jr. From 1892 to 1896, Jordan and John served as members of Berea’s Board of Trustees and John was chosen as the Berea College Alumni Association President in 1892.

Even though Jordan C. Jackson, Jr. was born a slave in 1848 in Fayette County, he was self-taught and he became one of Kentucky’s strongest education advocates. He was a Trustee at both Berea and Wilberforce colleges. Jordan was also a business man, banker, politician, newspaper editor and author. In 1905 – 1906, Jordan served as a member of the Executive Committee National Negro Business League.  Booker T. Washington founded the National Negro Business League (NNBL) to promote the commercial, agricultural, educational, and industrial advancement of African Americans in 1901. The NNBL was an important social and economic organization among African Americans in the early years of the twentieth century. Its core membership was the black economic elite of businessmen and women and professionals.

Belle and Jordan attended St. Paul African Methodist Episcopal Church in Lexington.   It was built in 1826 and according to noted architectural historian, Clay Lancaster in his book, Vestiges of Venerable City, was “the oldest continuously used and existing house of worship in Lexington.” [6]  In 1850, a one story addition was added to the church which included a secret room and crosswalk for runaway slaves during the Underground Railroad era. 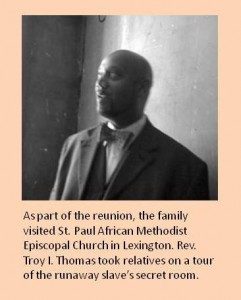 Belle and Jordan worked tirelessly together in their business enterprises. Jordan was once quoted as saying that Belle was the best investment he ever made and that he owed much of his success to her. Belle co-operated a millinery shop, Jackson and Hathaway in downtown Lexington. One of her most significant achievements was as the founder and President of the Colored Orphan Industrial Home in 1892, now known as the Robert William’s Cultural Center in Lexington.

With one generation out of slavery, there were many destitute, homeless and orphaned children and older women living on the streets of Lexington. In 1894, the Home opened to twenty-nine boys and girls and seven women. It was the only establishment in Lexington providing care and services for African American children. From 1894 to 1911, a total of 304 residents (152 boys, 127 girls and 25 women) lived in the Home.

The Colored Orphan Industrial Home (Home) was established as a corporation with a board of 15 female members or Managers. In an era when the majority of African American women were field laborers or domestic servants, these women were truly remarkable in spite of insurmountable obstacles. Also at this time, women were not allowed to vote and the majority of women did not have bank accounts in their own names. The Trustees were the spouses of the female managers and consisted of seven African American men: Frank Buckner, president; George M. Moore, vice president; Henry L. Gowens, secretary; Anthony M. Boswell, Marshall T. Clay and Jordan C. Jackson.

At the Home, the orphaned children were given a safe place to live and educational training in Christian education, basic skills (reading, writing and arithmetic) and a variety of industrial skills such as kitchen (housework, dishwashing and gardening), cooking, sewing, shoe shop (repairing and making custom-fit shoes) and blacksmith shop.

“My labors have been arduous and exacting of my time and judgment, but these have been cheerfully performed, as it has been my hope that I might do something in a humble way to advance and build up a Home that shall be enduring and honored among institutions of our land. I know I have had your sympathy and hearty co-operation in this work, for our meetings have been harmonious. That I have been free from errors and wise in all things, it would be beyond erring human nature to hope, but “with charity to all and malice to none,” I have made an earnest effort to discharge the duties of my high trust, as to meet your charitable commendations. And now I can only indulge the hope that whatever of good I have done may be cherished and preserved.” 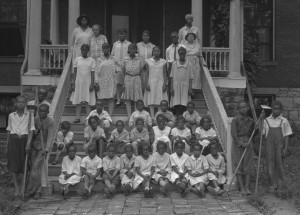 The women managers were very creative, persistent and successful at fund raising for the Home. “At their first meeting, they accepted the challenge of raising money to purchase property for the Home. All members were expected to raise funds and pay an annual subscription fee of five dollars; members also made small payments throughout the year.” [8]

In 1980, the Home changed the name to the Robert H. Williams Children’s Home to commemorate the generosity of a major donor. The program changed from services for destitute orphans to a community service agency providing educational, social, recreational and cultural needs for all citizens in the community.  In 1988, the name was changed to the Robert H. Williams Cultural Center. It is located at 644 Georgetown Street, Lexington, KY 40508.

Belle and Jordon had one child, named Minnie Carlye Jackson. Jordan died in 1918, at 70 years and Belle died in 1942, at the age of 94 years. Edward W. Jackson, Sr. was Jordan’s older brother and he was born a slave in 1846 in Fayette County. He was a dairy farmer and he married Delilah Culverson and they had twelve children in Lexington. 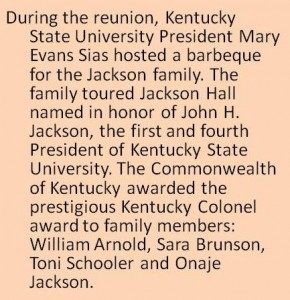 John H. Jackson was Jordan’s younger brother and he was born a slave in Fayette County in 1850. At a young age, John showed his love for education and teaching and he enrolled at Berea College at the age of sixteen!  John graduated as the first African American college graduate (also the first in all of Kentucky) from Berea College in 1874. Also in 1874, the Kentucky legislators approved the formation of state supported public schools for Negroes. John became the Principals of the Corrall St. School and later, the Daniel Hand School, both in Lexington. 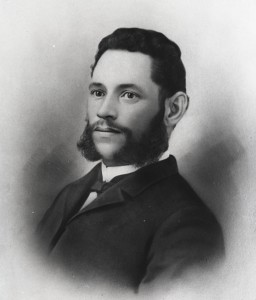 He became the Founder and President of Normal School for Colored Persons, now known as Kentucky State in 1878, in Frankfort. In the first term, the school had three teachers and fifty-five students and one building, Jackson Hall. John served another term as President from 1907 to 1910.

“His trail-blazing tenacity to educate African Americans following the Civil War helped to spark a fire that to this day goes unquenched. A pioneer educator amidst Kentucky’s old slave mentality, Jackson challenged all odds against him, and learned to triumph with class.” [9] 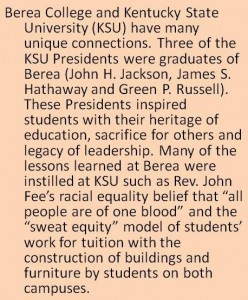 This article is dedicated to Dr. Anne Butler, the former Director of the Center of Excellence for the Study of Kentucky African Americans at Kentucky State University. Professor Butler was a tireless champion of genealogical history of African Americans in Kentucky and a special friend of the Jackson family. 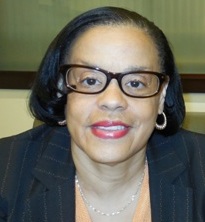 Aleta Hodge is a grant writer and lives in Indianapolis, IN.

free sample merely need to keep in mind that the that nix will alter.