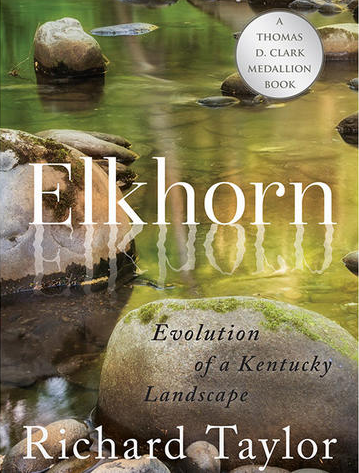 “Richard Taylor is professor of English and Kenan Visiting Writer at Transylvania University and former Poet Laureate of Kentucky. Taylor has written numerous books, including Sue Mundy: A Novel of the Civil War, Girty, and Earth Bones.” – Back Cover.

Elkhorn: Evolution of a Kentucky Landscape is a book in which Richard Taylor tells of the history of a small section of one of Kentucky’s longest creeks, Elkhorn Creek.  Taylor was introduced to the Elkhorn in 1975 when he took a teaching position with Kentucky State University. He explains in the introduction that he and his wife were looking for a house that needed some work to save money. They found a house that needed a lot of work that just so happened to be on the Elkhorn. Thus began Taylor’s 40-year love of home, of the creek, of place, or as Taylor calls it: topophilia. He explains that this topophilia was his main reason for writing Elkhorn.

The Elkhorn has had a rich history. Taylor weaves this history from his research on the area into a cloth of thought and emotion that brings Elkhorn Creek to life. He describes in detail the events that helped shape the area. Taylor describes fossilized mammoths, discovered in 1945, and the story of their discovery. He also examines the indigenous peoples that populated the region for thousands of years. Other chapters tell of the settlement by early pioneers and the effect this settlement had on the inhabitants and the region as a whole.

In one particularly vivid and violent chapter, Taylor relates the events of the Cook Massacre at Cook Station in 1792. Many cabins were destroyed and several settlers were captured or killed. Two of the cabins that survived the Indian raid are actually still standing today. They stand as reminders and storytellers in their own right to visitors along the Elkhorn.

Taylor also delves into the people that lived around Elkhorn Creek. Throughout the book, glimpses into the lives of those people help give depth and life to Elkhorn Creek. Hancock Taylor was an early surveyor and Elkhorn describes the events in 1774 that led to an “escalation of hostilities” between the Indians and European settlers with the deployment of scouts, Daniel Boone and Michael Stoner, by Colonel William Preston to warn those in the area of the danger.

There are many other notable families and figures connected to Elkhorn Creek in various ways. Taylor tells of many of them and their families: Judge Harry Innes, Harry Innes Todd, Ann Shiel Innes, General James Wilkinson, Humphrey Marshall, Hosea Cook, Jesse Cook, Elijah Craig, Ebenezer Hiram Stedman, Paul Sawyier, William Church and many others have at least mentions in Elkhorn. Several have detailed histories of their lives and their connections to Elkhorn Creek.

Being very close to a different stretch of Elkhorn Creek, we understand Taylor’s topophilia. The Elkhorn is a remarkable creek that has had a profound influence on central Kentucky. The beauty and power of the Elkhorn has helped shape the region.  Elkhorn: Evolution of a Kentucky Landscape does a remarkable job of telling the history surrounding this amazing body of flowing water and we would recommend this book to anyone interested in Kentucky history.

For research purposes, this book would be great for learning more about life along one of our many Kentucky watercourses. It also contains: index, appendices, illustrations, maps, and portraits.