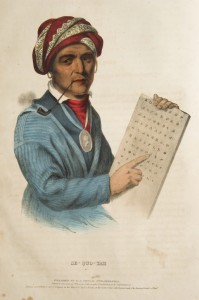 As many of you know, November is Native American Heritage Month. For those of Kentucky lineage, this can be quite important due to the many lines of family impacted by this portion of our population. Despite the many stories we have heard about Native American heritage in our genealogy, documenting the paper trail can be a challenge – to put it mildly. The farther back the story originates, the harder it is to prove that lineage through documentation. Plus, keep in mind, that in many instances, the story may have reflected the opposite of the paper trail – on purpose. In other words, it was common practice to hide one’s ethnic background if not living with the tribe on tribal lands. Since Kentucky has no officially designated tribal lands, tracking down the family origins can be tricky.

Last year, Cherokee genealogy specialist, Anita Finger-Smith spoke at our Second Saturday program and covered many of the misconceptions researchers face. She reminded attendees that tribal affiliation is very strict concerning the document trail, and many tribes rely on certain “Rolls” or census lists taken to determine membership. As for the Eastern Band of the Cherokee, in North Carolina, one of your ancestors must be listed in the last Roll taken in 1924, called The Baker Roll, in order to qualify for membership. Ms. Finger-Smith was gracious enough to bring a copy along and donated it to the KHS Library!

Of course, when researching your Native American roots, we have many other titles and resources that can help you with various tribes. One tip that is important to remember when searching library catalogs for Native American resources: Most Native American resources are categorized under the subject heading that includes “Indians” not “Native Americans.” It is a good idea to search our catalog for both terms to make sure you catch the titles that are about Native American research. However, always conduct a second search for “Indians” to make sure you find the majority of the titles. Just as a side note, Ms. Finger-Smith addressed this variance in terminology. As for tribal citizens within the United States Territories, she says they prefer the term “Indian”, which explains the Library of Congress sticking with their original subject headings on this one.

So, what kind of goodies do we have regarding Native American Heritage? Here is a small sampling (please see our library catalog for a full list: http://khscatalog.kyvl.org/vwebv/searchBasic) For additional resources online from the National Archives, please see their resources page (http://www.archives.gov/research/native-americans/reference-reports/):

Note: One of my favorites as it details those who lived in some of the eastern territories prior to the Trail of Tears.

Note: Roll necessary for membership in the Eastern Band of the Cherokee.

Title:            The eastern Cherokees;a census of the Cherokee nation in North Carolina, Tennessee, Alabama, and Georgia in 1851.

free sample just need to bear in mind that the that nothing will transform.