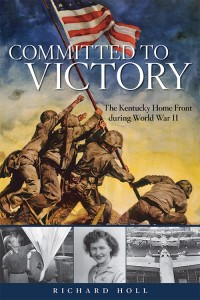 Often when we think of World War II, we think of those serving on the front line—the experience of the soldier on European soil or in the Pacific. Richard E. Holl’s Committed to Victory: The Kentucky Home Front during World War II offers readers the first comprehensive account of the war effort by those at home in Kentucky. This is a meticulously researched  study of World War II’s effects on Kentucky’s economy, politics and social landscape.

The scope of this book’s narrative is inclusive of national information but has a regional focus that is highlighted by individual stories uncovered through Holl’s painstaking research! It is the first published examination of life on the home front in Kentucky. Holl has created a rich portrait of how Kentuckians kept the home fires burning during the War.

Holl looks deeply into the role of women and the wartime experiences of African Americans at the time. He then demonstrates how the changes imposed during this time forever altered the course of Civil Rights in the United States. Holl also communicates both positive and negative aspects of the war effort. Discrimination, conflicts, and the strain of war are present and descriptively recounted to give a full account of life in the Commonwealth at the time.

This is a great example of how archival material can be used to create a portrait of daily life. Much of Holl’s research was conducted at the Kentucky Historical Society. Not only does Holl reference articles from The Register of the Kentucky Historical Society, he used materials found in several of the collections held KHS. Most notably, he used information from The Louisville Civil Defense Records (1942-1947), The Kenneth G. Maddox Papers, The Kentucky Oral History Commission Collection, and the Chescheir Family Papers.

One such story of note to mention would be the story of Rose Will Monroe. Holl details how Hollywood actor Walter Pidgeon recruited Pulaski County native, Rose Will Monroe, to be featured as the real life Rosie the Riveter in a series of films made to sell war bonds.

From a genealogical perspective, Holl does feature the efforts of other local individuals during the War, but also brings context to the activities of those left at home. During the War, many factories, and infrastructure components were altered to provide for the war effort. Holl details some of these changes, thereby shedding some light on how the War impacted occupations and volunteer activities. Beyond the factory alterations, agriculture in Kentucky was naturally impacted a great deal. As the farmers strove to produce as much food as possible for the soldiers, so anyone with a patch of land grew their own food in the form of Victory Gardens to relieve the pressure of feeding the masses left at home. Did your family have a Victory Garden?

As a result of war, migration is also an expected outcome. Holl demonstrates that WWII was no different in this regard. When attempting to track the movements of our ancestors before, during, and after this world event, this book will provide clues as to what might have motivated your ancestor to make a move, and in what areas large numbers of citizens were settling. Holl also weighs in on how this changed everyone. No one was exempt from the effects of the War, and despite most of the battles taking place far from American soil, the impact on families and society in general was significant.

This book is highly recommended for those who are looking for a well written depiction of life in the Bluegrass during World War II or those looking to understand the politics that influenced the experience of Kentuckians during the era.

free sample just need to mind that the that nothing will betray.