Home Feature Articles The Letters of Frances Pope: “Bad speler…and too old to lern to do better”

Frances Watkins Walton was the third wife of John Pope[1]. The couple married in 1820 and are buried side by side in the Cemetery Hill Cemetery in Springfield, Washington County, Kentucky. John Pope was a substantial citizen of Kentucky.  He served in both Houses of the Kentucky Legislature, both Houses of the United States Congress and was Territorial Governor of Arkansas.  He demonstrated architectural vision in commissioning Benjamin Latrobe to build what is now called the Pope Villa 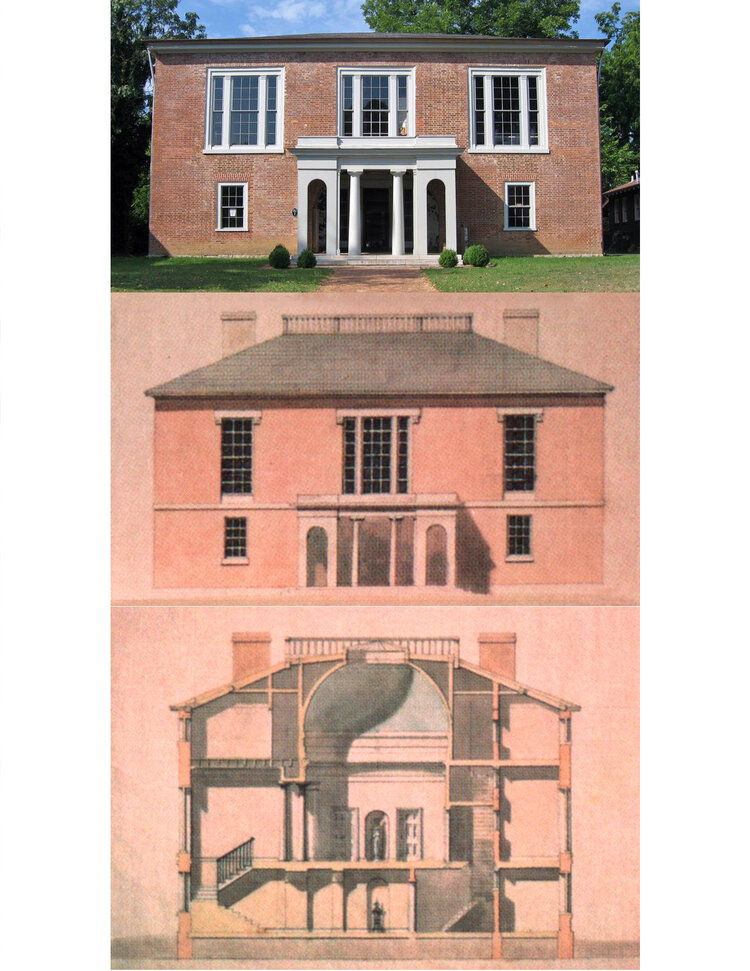 in Lexington.  His wife Frances was not a prominent figure in history but a letter[2] she wrote to her young friend Maria Reed Nelson in 1824 gives insight into her engaging character and that of her husband John.

Frances was about 25 years older than Maria, very near the same age as Maria’s mother, Margaret Reed. They knew each other because of many connections in Springfield, Kentucky where Maria was born and where Frances had lived for many years. The two women shared an interest in the church, and Frances knew “Mr Nelson,” Maria’s husband, Samuel Kelsey Nelson, minister of the Presbyterian Church in Danville.  Frances invited Maria “…to come down and spend a few weeks with your Springfield friends.…”[3]

Frances wrote to Maria in response to a letter she had received from her earlier.  “A few days ago I received my Dear Marias letter…”[4] and assures Maria that she does not love her any less even though years have passed since she saw her. The letter goes on in the most florid poetical style, but then she engagingly says “…but my good Husband is so fascinating and my Children so interresting and my helth so good that I fear I am two much glued to the things of time I often pray that my blessings may not prove my ruen.”[5]  Frances believes her husband is so good that he interferes with her relationship to God, she goes on to say, “…I intierly forgit myself in him… He is so kind hearted so benevelolent so much of a phalonthropis to all mand kind that his wife Chrldren and servants has a double share of his good feelings and kindness…”[6]  Then, “Oh Maria if he was only a Christian I should be two happy.  Many afervant ardent pray do I put up for him…”[7]

Her letter continues in an avalanche of bad spelling, but there is interesting family information in the letter too.  She talks about Watkins Cocke who may be living with her and John Pope.  Watkins and his sisters are “the orphan Children of my Dear and Amiable sister….pore little things. I do feel so much for them.”[8]  She goes on, “…I have so many small Children to raise…”[9]

She ends her letter, “you see how highly I prized your letter. And the difficulty. You laberd under to write it makes me prise it still more… bad speling your know was allways my complaint, and I am too old to lern to do better  so go my letter just as it is to my sweet friend maria….” [10] 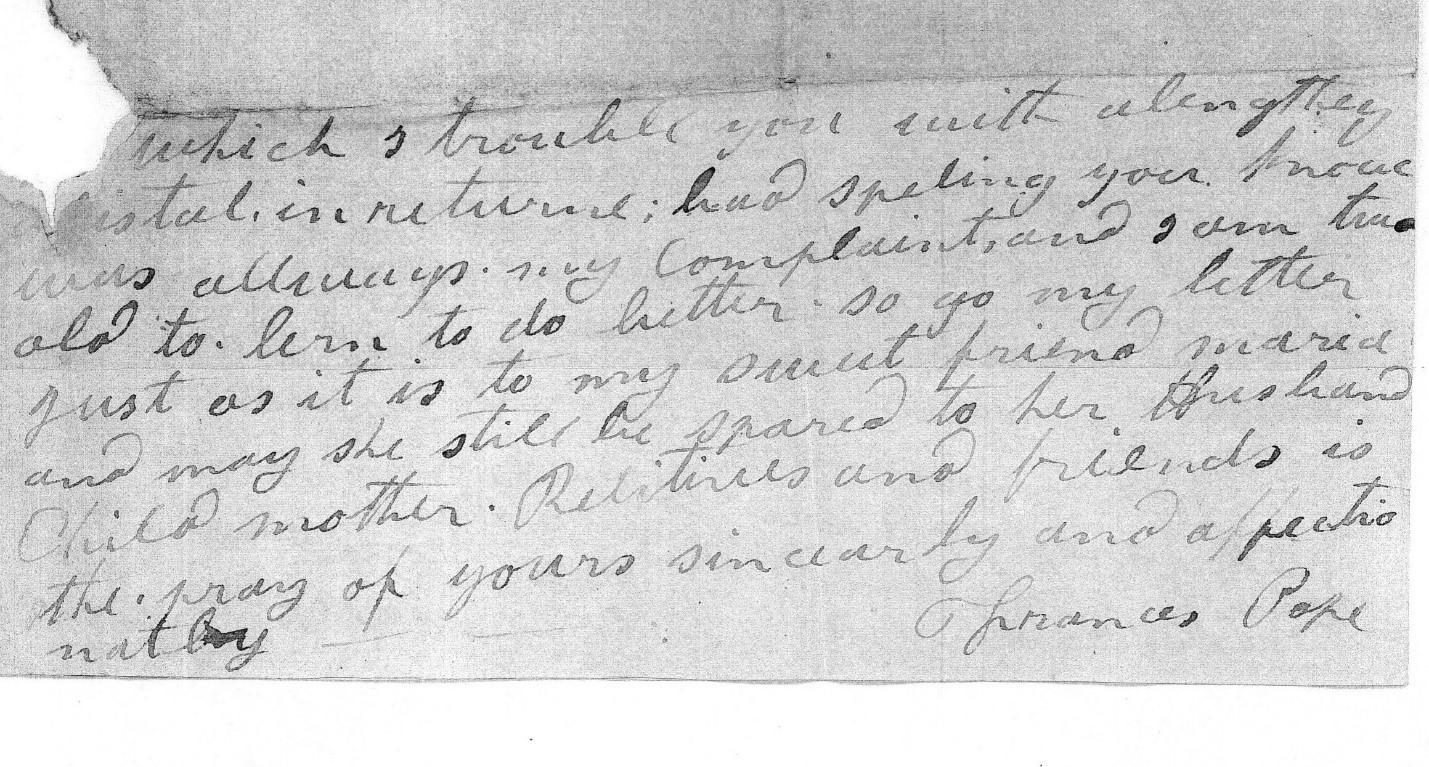 The ending of Frances Pope’s 1824 letter, reproduced here. She writes a good hand, with confidence and recognition of her spelling limitations. She adds human insight to early Kentucky history. Image Courtesy of the Filson Historical Society, Sidney Payne Clay Papers [Mss. A C621a 17].

Frances writes with joy and cheer, content with her life, with a confident and hearty tone to a woman much younger than she. Other women might have felt the urge to lecture, but not Frances. She is just chatting and eager for a visit.  She provides a compelling picture of John Pope, a good husband “so fascinating”; a human picture of a man who is likable and maybe as cheerful as his wife.

Another sign of John Pope’s good nature was his accepting attitude to his nickname, “One-Arm Pope.” As a boy he had lost an arm in an accident while attending a cornstalk mill. According to Collins, “—an accident which turned his attention to the profession of the law.”[11]

The year of Frances’ letter to Maria, 1824, there was much activity in the Pope household.  John Pope threw his support in the presidential election behind John Quincy Adams (his brother –in-law through his second wife, Elizabeth Johnson) and against Henry Clay and Andrew Jackson. By 1828 Pope had fallen out with John Quincy Adams and actively campaigned for Andrew Jackson. After Jackson’s election, Jackson was grateful for Pope’s support and Pope was appointed Governor of Arkansas Territory.

There is another letter from Frances Pope, written in 1829 to then President Andrew Jackson at the high point in John Pope’s support of Jackson.[14]  There is no doubt that Frances wrote it; however, someone spent some time cleaning up her writing style and spelling before it was entered into the printed catalog of Jackson’s letters.  There are only two misspelled words in the letter, and there are paragraphs, indentations, periods at the ends of sentences, capital letters at the beginning of sentences.  It is possible that Frances, knowing about her spelling handicap, had a secretary. In the end of her letter to Maria she says, “so go my letter just as it is…”  She may very well have had an editor.  The cadences of her letters feel similar, and in her letter to Jackson she shows her courage in dealing with words she could never have spelled, like “epistolary”, “disapprobation”, “highmindedness”, “characterized.” Frances was fearless.

Her letter to President Jackson was written in protest of the removal of Mr. Hawkins, the postmaster of Frankfort, Kentucky.  She gives many arguments about the value of her input in the matter and is mildly threatening that Jackson might lose some supporters, “…it has and will turn many Jacksonians.”[15]  She ends by saying that clearly he must not have gotten her letter in support of Mr. Hawkins, and continues “…if I do not receive an answer to this, I must resort to some other conveyance than that of the mail.”[16]  A note by the book editors indicates that Jackson did respond to her letter. It would be interesting to know what he said. 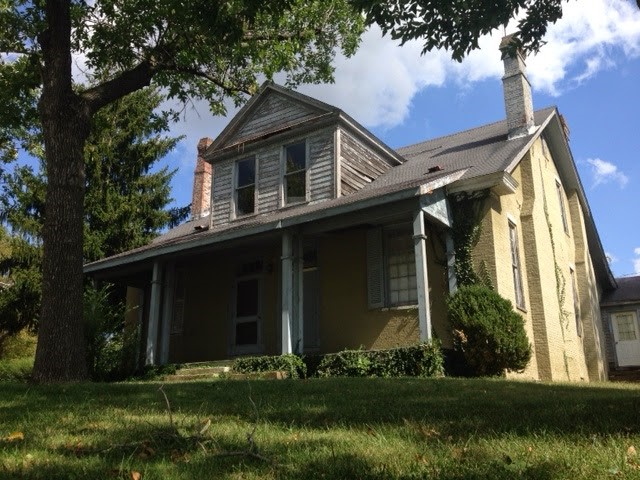 House built by John and Frances Pope in Springfield, circa 1835. It is currently described by the Kentucky Trust for Historic Preservation as architecturally significant. Photo by the author.

John Pope and Andrew Jackson gradually had a falling out and after one term as Territorial Governor of Arkansas, from March 1829 to March 1835, Pope returned to Springfield. In Springfield he built a house on North Walnut St which stands today.[17]  He and Francis lived there until her death in 1843. By December 1844 when he wrote his will, he lived in Little Rock, Arkansas, where his son-in-law John Watkins Cocke was living.[18]

As a final post script to Frances’ story, her first husband was General Matthew Walton (1759-1819). According to Kentucky Highway Marker #933,[19] he was the founder of Springfield in Washington County, and surveyed and owned more than 200,000 acres of land. Matthew Walton was also a representative from Kentucky to the U.S. Congress 1803-1807 as well as a member of the first State Constitutional Convention of Kentucky in 1792 and a member of the Kentucky House in 1792, 1795 and 1808.[20] 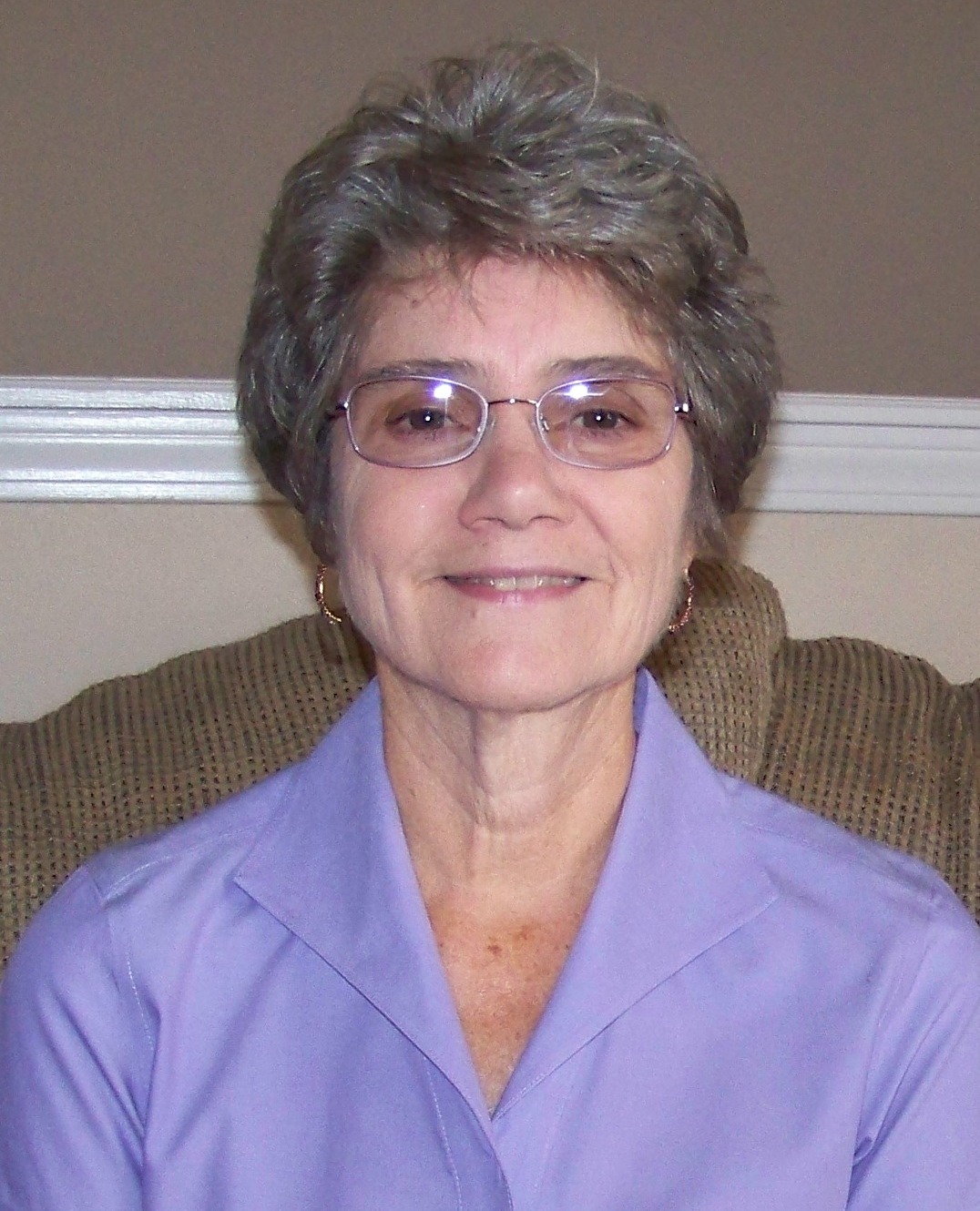 Rogers Roseberry Bardé returned to Kentucky in 2003 after 30 some years in New Mexico.  Since being back family history and Bourbon County history have become sort of an obsession. She writes: “I love history.  It was my major when I graduated from Randolph Macon Woman’s College almost 50 years ago.  My mother and I worked on the Bourbon County cemetery book, God’s Acres: Private Graveyards in Bourbon County, Kentucky – known affectionately as the Grey Book – and I worked on an architectural walking tour brochure for Hopewell Museum in Paris.  Both projects were recognized by the Kentucky Historical Society, which was a great honor.  I see many projects ahead of me.