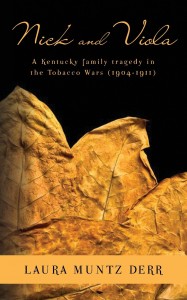 Sometimes, it takes a murder or family tragedy to make us slow down and examine the historical context associated with the lives of our ancestors. Laura Muntz Derr has taken one family tragedy and examined the mitigating circumstances behind the event, which resulted in a contextual analysis relatable to many Kentucky genealogists. During the early years of the 20th century, Kentucky’s tobacco industry was encountering an economic upheaval. With companies attempting to regulate the tobacco prices, tensions flared, and the turbulent era of the Tobacco Wars was born. While most researchers are familiar with the Black Patch War of south western Kentucky, Derr tells a story about the northern conflict, the Tobacco Wars, which she explains in detail, and reminds readers that while these events were related, they were not the same.

This is what I love about the telling of this story: Derr gives a wonderful background on the difference between the various tobacco struggles from a regional perspective. Statewide, Kentucky was a hotbed for this controversy, but as Derr points out, even the tobacco being fought over was a different type. In the northern and central parts of the state burley was grown, while in the south western part of the state, the fight was over black patch tobacco. After making this disctinction and setting the stage of historical characters, Derr takes these known facts and explores the complex effects that infiltrated farm life at that time. She reminds readers that, even decades later, burley tobacco shaped their lives all season long. Researchers often relegate the effects of an event to those directly involved. In this case, the surrounding social conditions, even though not directly related, influenced the events of one evening that destroyed a family. Without giving too much away, Derr relates her family’s tragedy that was a by-product of the fear mongering that was being used to manipulate the actions of local farmers. With the violence surrounding them, one dark evening of confusion and fear ended in death, with rippling after-shocks felt throughout the subsequent generations.

In short, this is a great read for educational and genealogical purposes. It is well sourced and builds a great foundational background for those families influenced by this period in Kentucky’s history. But the real lesson learned from this tale is the importance of understanding the social, cultural, economic conditions or events your ancestors were living through. One sentence in a history book could actually mean years of direct or indirect influence on multiple generations.

free sample merely need to remember that the that nil aspiration vary.