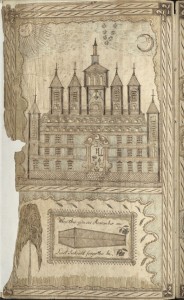 This month’s History Mystery features a special family treat, with some unanswered questions. We’ve all seen the occasional family Bible record that recorded the life and death events of family members. While most are fairly simple in design, some can contain beautiful color embellishments. The thing I want you to remember is that the Miller Fraktur is NOT a family Bible record, despite the fact that the information contained therein resembles the entries commonly seen in family Bible pages. The pages you see here are from a ‘Fraktur’, which is a term that can be defined in two ways.

Let’s learn about the two types of Frakturs:

In either case, the word is Germanic in origin, and ties back to the German heritage of those who brought this style to North America. ‘Fraktur’ was first used to describe the type of lettering that was stylistically developed in the Germanic region and was popular beginning in the 16th century. In particular, the script style, or calligraphy, was popular in documents, books, and newspapers. When an emphasis or embellished text was necessary to make an impact, the Fraktur style of font or script was incorporated. To visualize the lettering, think of very large, black letters that were fragmented or flowing. Some also refer to this type of lettering as “Gothic.”

The combination of using this script style in conjunction with drawings and commemorative information meant that the term took on a slightly new meaning. These elaborate drawings with important information soon became known as Fraktur Folk Art. The best examples of this type of artwork can be seen in the areas where Dutch settlers lived in large communities. Most have heard the term “Pennsylvania Dutch” in relation to stylistic furniture and barn design. This is an area that would have produced many Frakturs as folk art – many of which were one page masterpieces meant to be kept as mementos of an occasion.  One thing to note about Fraktur design is that they were not usually hand-drawn by a member of the family. It was not impossible to be completed by a member of the family, similar to the hard work that went into a sampler, but the custom usually included a traveling or local artist that sold ready-made Frakturs. Traditionally, an artist would complete several Frakturs in various designs, with only the names missing from the pages. If one was selected by a family, the artist would customize the pages according to the entries needed. This is why several Frakturs can be seen with the exact same design, but for different families. There were also books available that taught prospective artists about the various designs that could be used.

The Fraktur itself is a stand alone collection of roughly eight pages. It has a cover to keep the pages together, and each design framing the family information appears to be hand-drawn, not printed as one would expect from a Bible that had been filled in. The first entry contains the birth and marriage dates for a couple: John Miller and Ruth Bailey – married in 1782. Interestingly enough, the script used in this Fraktur is not the traditional fraktur script. It is much more simple and geometric in design. 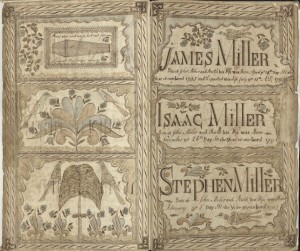 As one goes through the pages, the complexity of design across from each entry is the most intriguing feature. The opening page, complete with castle or Church-like structure is full of Masonic symbolism and beautiful framing. Below this opening scene, a coffin and weeping willow tree have been incorporated with the short poem usually seen on gravestones: “When this you see remember me, Least I should forgotten be.” The coffin appears to coincide with the entry for a son that was stillborn. In later pages, another coffin can be seen marking the entry for another child that died at a young age.

So, what is so mysterious about our Miller Family Fraktur? 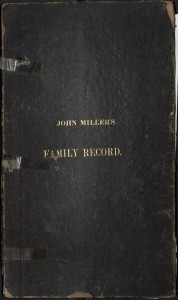 The family this Fraktur belonged to came from from Berkeley County, Virginia (now West Virginia) and settled in Spencer and Nelson Counties, Kentucky. That is the information we were given by the family that donated the item. The entries for the children run from 1783 to 1803. The names of children are: Hiram, Alexander, Esther, Elizabeth, John, Joseph, Ruth, James, Isaac, Stephen, and Abigail. The first child is born in 1783 and the last in 1803. The last entry in the Fraktur is from 1799, but Abigail was born after the Fraktur was made, and someone had begun to add her entry in pencil with no matching design.

So….from this official list of family members…WHO were John and Ruth [Bailey] Miller? When looking up tree entries in Ancestry.com, the trees are all over the map in relation to this couple. Several researchers have identified him as Colonel John Miller who was in the Revolutionary War with General Washington at the surrender of Cornwallis. Others have him married to Jane Dulaney instead of Ruth Bailey, and still some have him married to both women after one of them has died. The list of children for any of these trees does not match the list we have here in the Fraktur, and yet the locations for most of the John Miller trees match our Virginia to Kentucky locations perfectly. All of this mix-matched wrong information is usually unsourced, or cite other wrong trees as proof of information. Let this be a lesson to those who rely on the Family Tree functions within genealogy databases: forget the unsourced! Only look at sourced trees, and then follow the citation trail yourself to make sure the information is accurate! For anyone who might know more about this family, or has the time to research further through legitimate sources, let us know more! Is this YOUR family? We’d love to hear more about the story of John and Ruth!

For additional information about Frakturs:

free sample barely need to have in mind that the that nix desire change.