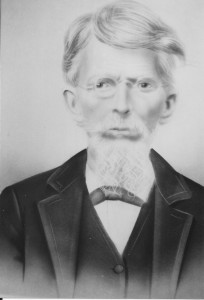 David Cozine Westerfield of Mercer County, Kentucky, enlisted in 1861 and valiantly served with the Union Army, 19th Kentucky Regiment. On 2 January 1862, at Camp Harrod, Harrodsburg, his unit was mustered into service. Westerfield’s service with Company B took him from Kentucky to West Virginia to Tennessee to Arkansas to Louisiana to Mississippi.  Although the 19th continued on, Westerfield’s service ended at the Battle of Vicksburg. [ii]

During the course of the war, David incurred frostbite, an infection causing permanent loss of sight in one eye, broken ribs, a gash to his forehead, the loss of the tip of his ear, the disabled use of one finger, dysentery, fever and hemorrhoids. By 13 August 1863, Westerfield’s unit was dispatched from Vicksburg to New Orleans. For medical reasons, David was unable to accompany his unit to New Orleans. Instead he was transferred and admitted to General Hospital, aboard the US Nashville, a steamer with the capacity to provide care for 1,000 ill and wounded soldiers.[iii] [iv] 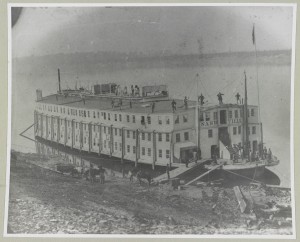 Steamer US Nashville Hospital Ship at Vicksburg, circa 1863

An over-stretched communications network, complicated by the distance between David at Vicksburg and his command at New Orleans caused Westerfield’s whereabouts and status to become confused, unknown and inaccurate. Thus, in early 1864, contrary to facts of the time, David was recorded as a deserter, noted ‘absent without leave’. That status remained unchanged at war’s end and in 1866 Kentucky’s Adjutant General’s final report of the war listed David West(er)field as a deserter from ‘Hospital Ship’ at 1 March 1864. [v]

Westerfield became aware of his mis-characterization as a deserter in 1888, when both the War Office and the Pension Office denied his claim for pension benefits. With the aid of law firm Charles J. Donnelly of Washington D.C., David began the slow process to correct his military record. Almost three years later, in 1891, the War and Pension Offices completed their reviews, concluding that ‘mutilation’ of war records had caused the error.  Shortly after this, the War Office re-issued Westerfield’s military certificate of discharge and the Pension Office approved his pension application. [vi]

Using multiple record sources, reconstruction of the events after 13 August 1863 shows David’s admission to hospital (US Nashville) on 16 August, a medical furlough on 15 September and transfer to the Cairo, Illinois Army medical center prior to 29 February 1864. On 1 March 1864, Westerfield, a medical discharge certificate in his possession, began his journey home. Military records show an expense of $6.50 for David’s transportation from Cairo to Louisville, indicating he traveled by commercial steamer. From Louisville, David completed his journey home to his farm situated across the road from the Old Mud Meeting House in Mercer County. In a US Census addendum for Surviving Soldiers of War, David reported his original discharge certificate was destroyed, stating the certificate “burned up”. [vii] [viii]

Today, genealogical researchers are prone to report David a deserter, noting the Adjutant General’s inaccurate entry. The purpose of this article is to shed a truthful light on the errors recorded in several documents. The War Department permanently removed David’s erroneous charge of desertion, specified and annotated by Bookmark Notation: 2318 & ’88. David and Anne (Covert) Westerfield received military pension benefits until 8 October 1913.[ix]

David Cozine Westerfield: the Rest of the Story

On 4 September 1825, Mercer County Surveyor James Cozine Westerfield and Phoebe (Sortore) Westerfield gave birth to David Cozine Westerfield at their farm near the Old Mud Meeting House, southwest of Harrodsburg. According to family letters – a youthful David stood with his father outdoors and watched ‘stars fall’ and viewed ‘Lolleys’ [sic – obvious references to the massive Leonid Meteor shower that showcased itself across America during 1833 and Halley’s Comet in 1835].[x]

During 1862 David’s 14 year old son, James Gallen Westerfield, re-united with his father in Tennessee and served as a drummer boy for the 19th Infantry, although he never enlisted. James Gallen returned to Kentucky and participated at the Battle of Perryville in autumn of 1862.[xiii] During the war, the exact event and date not recorded, David suffered wounds that match precisely those encountered from a hammering butt of a rifle to the ribs, a bayonet thrust upward and deflected by one’s hand, possibly severing a ligament or tendon (eventually leading to the loss of use of one finger) and a bayonet gash on the forehead as well as a cut that nicked a small chunk from his ear. In 1863 one such military engagement at Sabine Crossroads during the Battle of Vicksburg bears consideration as a possible site for David’s injuries. The 19th Infantry fiercely held ground and repelled five distinct charges before the Rebel force broke through its lines. Corp’s commander, General Thomas E. G. Ransom, said, “They all did nobly, and their list of killed and wounded bears evidence of the obstinacy with which they resisted the overwhelming force of the enemy.” [xiv] Of course, the timing, location and nature of David’s injuries can only be speculated.

Following his military discharge, David encountered unsettling circumstances upon his return home and in 1864 initiated action to divorce his wife Parrie. Mercer County Court granted David’s divorce in May 1866. Witnesses testified that Parrie’s behavior while David was away at war as “lascivious.” Witnesses, H. G. Franklin and T. W. Bottoms Jr., testified “… [Parrie] bears the name of a bad character and keeps a whore house.  Everybody … looked on her as a woman of bad character … now worse than she was then … keeping a public whore house and often … four or five horses hitched to the fence at the place she now lives … seen her out in the woods frequently … with men … now lives with her mother …[whom] is also of bad character.”

At the home of John Hill in 1866, David married Thomas Anna “Anne” Covert, 23 years younger in age. Their marriage produced 9 children. Anne’s two guardians refused to relinquish her inheritance and in 1866 a seven year court proceeding began, eventually ending with a Mercer County Court ordered award of $769. Also in 1866, his father’s illness altered David’s plan to return to his farm in Iowa. James Cozine Westerfield died in 1867 and David transferred his Iowa land ownership to his two sisters. Later in life, David and Anne purchased 6 acres in Boyle County, situated about one-half mile south of Parksville adjacent to Jacob Cozatt. David Westerfield died on 26 March 1900. Both he and Anne are buried at Parksville Cemetery.[xv] 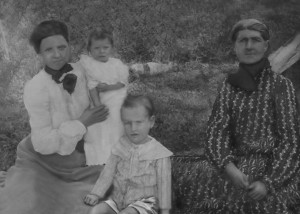 Ronald Clay Belcher is a descendant second great grandson from the marriage of David and Anne (Covert) Westerfield.

[v] Kentucky. 1866. Annual report of the Adjutant General of Kentucky [to the] Governor of the state of Kentucky, for the year 1864-5. Frankfort, KY: Printed at the State Print. Office, G.D. Prentice, State printer.

free sample merely need to mind that the that nix want alter.