In Kentucky, the knowledge necessary for making a proper Mint Julep is held in almost sacred regard. Ingredients must be pure and of the highest quality. Method of combining the ingredients must also adhere to proper standards. After all, if you don’t follow the steps precisely, your efforts have been wasted. No self-respecting Kentuckian would drink an improperly made Mint Julep!

“A Typical Kentuckian” postcard from the Ronald Morgan Collection.

As the process is steeped in tradition, the older the recipe, the closer to the original form we can get. Luckily, we not only have some published versions in older recipe books, but we also have a letter from 1937 that can help guide the creation of a proper Mint Julep. The letter was penned by Simon Bolivar Buckner Jr. to General William D. Connor at West Point. At an earlier date, the General must have asked Mr. Buckner to share his personal recipe, as this is a response to that request.

Instead of a simple recipe, Mr. Buckner reminded the General that a Mint Julep was not the product of a formula but rather “a ceremony and must be performed by a gentleman possessing a true sense of the artistic, a deep reverence for the ingredients and a proper appreciation of the occasion.” He also specified that “It is a rite that must not be entrusted to a novice, a statistician nor a Yankee.”

In case you are curious as to the list of fine ingredients worthy of this sacred ceremony, they happen to include: spring water, wild mint “growing in aromatic profusion”, and Kentucky Bourbon, “distilled by a master hand mellowed with age, yet still vigorous and inspiring.” The list of presentation equipment is equally as impressive including an “ancestral sugar bowl, and row of silver goblets.” 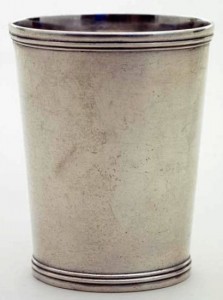 Yes, the rest of the recipe is included in this letter, but in typical Kentucky fashion, there is also a ritual involved when imbibing the sacred drink: “When all is ready, assemble your guests on the porch or in the garden, where the aroma of the juleps will rise Heavenward and make the birds sing. Propose a worthy toast, raise the goblet to your lips, bury your nose in the mint, inhale a deep breath of its fragrance and sip the nectar of the gods.”

While this letter may be all you need to craft the perfect Mint Julep, we have one other letter from a Virginia gentleman who claims Mr. Buckner’s recipe is incorrect. In 1950, W. A. Burress wrote a response to the Buckner letter, expressing his disagreement. As a Virginian, he felt he was the expert on proper Mint Julep creation, noting that Buckner could not be an expert on this matter as he was from Kentucky. His element of contention? The bruising of the mint leaf. He believed that the mint is “only meant to be breathed, not tasted.” And as further emphasis, he added, “He should not even bruise one mint leaf. Bruising mint is gauche.”

Of course, we in Kentucky might side more with Mr. Buckner due to state allegiance, but if you would like to try both recipes, you may get started right away. Both letters are available online through our Digital Collections Catalog. The Buckner letter and Burress letter can be found at SC 1153. You might want to practice this one repeatedly to get it right in time for the Derby!

free sample just need to bear in mind that the that nothing will betray.