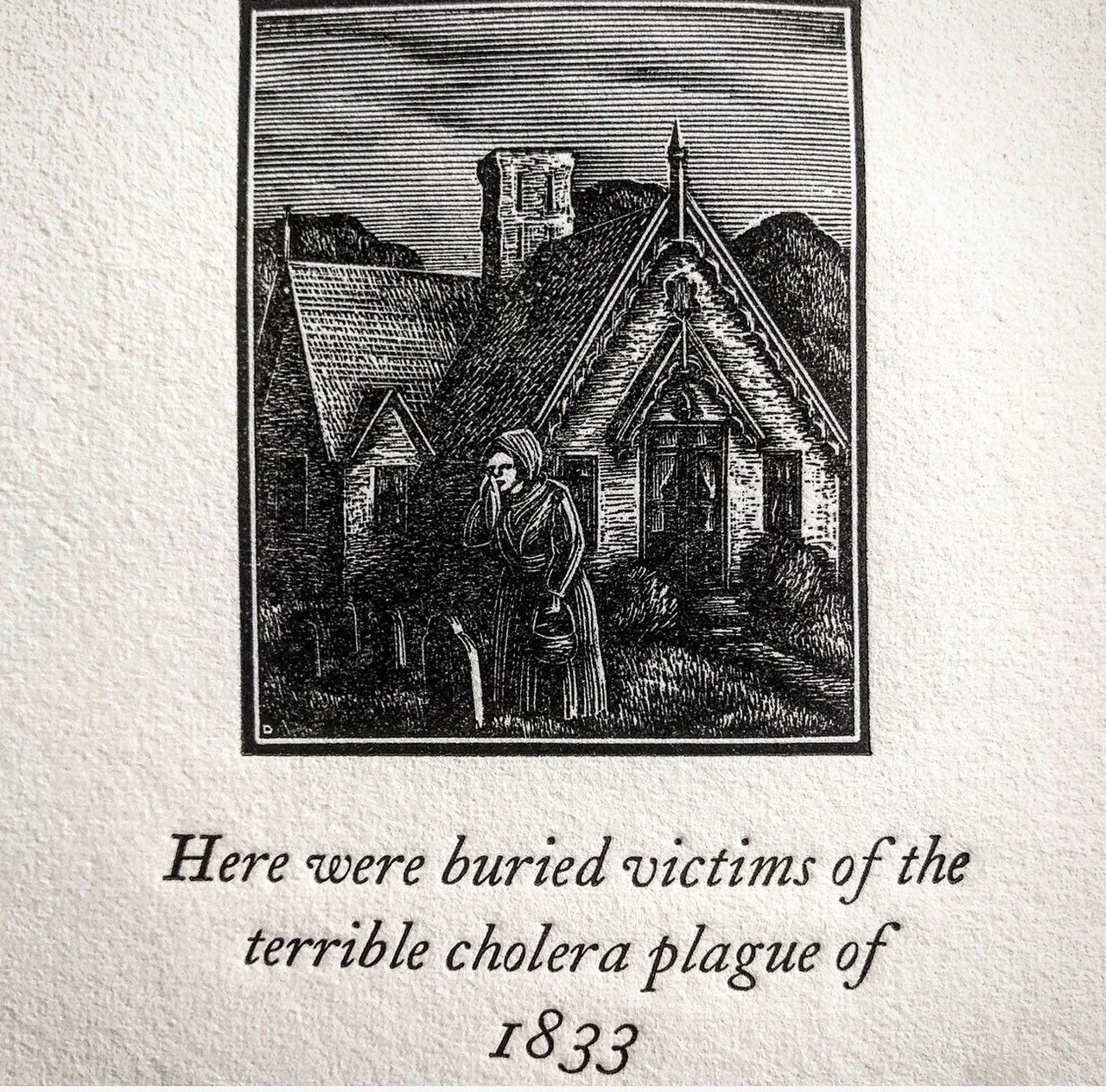 As the summer of 1833 heated up, the people of Kentucky became swiftly aware of the dangers spreading in their direction. A cholera epidemic, the first of several they would endure over the next few decades, was making its way west, and took root with a vengeance in Lexington. Much like our current pandemic situation, fear gripped the populace due to a lack of information regarding its spread, and an inability to treat it effectively. From June to August of that year, Lexington lost 500 of its seven thousand residents. If you’re doing the math, that’s roughly eight percent of Lexington’s total population at the time.
Lexington victims of the 1833 cholera epidemic succumbed so quickly, and in such great numbers that burial was a significant challenge. With a lack of understanding about how the disease was spread, citizens acted in fear and blamed poorer ethnic populations for the scourge. Those on the fringe of accepted society were tasked with burying the dead, and later emerged as heroes when the dust settled. While some of the spread was related to poor sanitation in the city, the disease knew no social class, and struck both rich and poor alike. Even though many wealthy residents attempted to flee its ravages, several still fell ill after leaving the city.
Downtown, at their residence on North Broadway, the Shryock family was busy influencing the architecture of Kentucky. The most famous of this family was Gideon Shryock, who is known for designing our third State Capitol building in Frankfort, on Broadway. As a part of our KHS campus, you can tour the Old State Capitol building once we reopen to the public in the coming months. For the time being, you can take a virtual tour of this beautiful structure – via Facebook video. 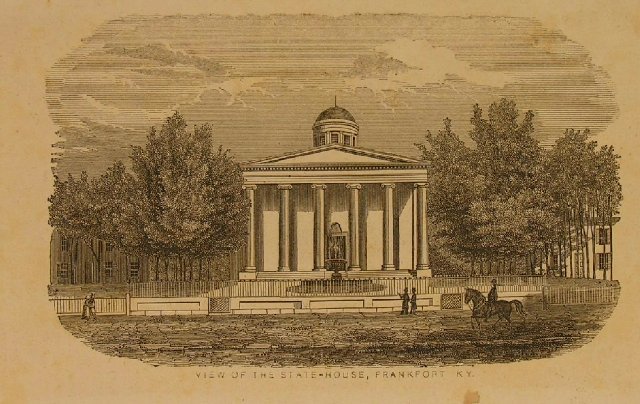 On June 14th Gideon’s father, Mathias, fell ill with the dreaded disease, and died within a short period of time. With so many people afraid of catching the illness, burial was at a stand still. Bodies were being piled outside of the cemetery gates, wrapped in bedclothes – in the hopes that someone would eventually be able to bury the city’s dead. Gideon and a family friend, Nicholas Heddington, decided to take matters into their own hands and dug a grave for Mathias in the Episcopal Burying Ground on Third Street. An account of the Shryock family’s experience with the 1833 Cholera Epidemic can be found in the Gideon Shryock Papers archival collection, held at here at KHS. This account was written down by Gideon’s niece, Elizabeth Field, daughter of Cincinnatus Shryock, in a report entitled: Gideon Shryock, His Life and Work.
“The terrible cholera epidemic occurred in Lexington in the summer of 1833, and five hundred persons died of that disease from June first to August first. On the 14th of June, when the plague was at its height, Captain Mathias Shryock, father of Gideon Shryock, died of the cholera, his being one of sixty deaths that took place that day. All resources for burying the dead had been exhausted and no coffins could be obtained. Mr. Shryock, with the aid of an old friend of his father’s, Nicholas Heddington, made a coffin, and, procuring a hearse or wagon, the two took the body to the Episcopal graveyard and performed for it the burial rites as best they could. No funerals were held; and only these two accompanied the body, Mr. Heddington driving the vehicle.
It was found that the gravedigger, becoming frightened, had left his task, and this had to be finished, keeping them a much longer time than had been expected. So sudden was the onslaught, and so quickly fatal was the disease, that Mr. Shryock’s mother became panic stricken, and fearing one or the other had succumbed to it at the grave, sent her youngest son, the writer’s father, to see if anything could be seen of the couple, whom he met at the corner of Second and Broadway returning from their task.
The monument over the grave of his father and mother, still to be seen in the old Episcopal cemetery, has been mentioned as “one of extraordinary beauty,” and is supposed to have been designed by Gideon Shryock.” 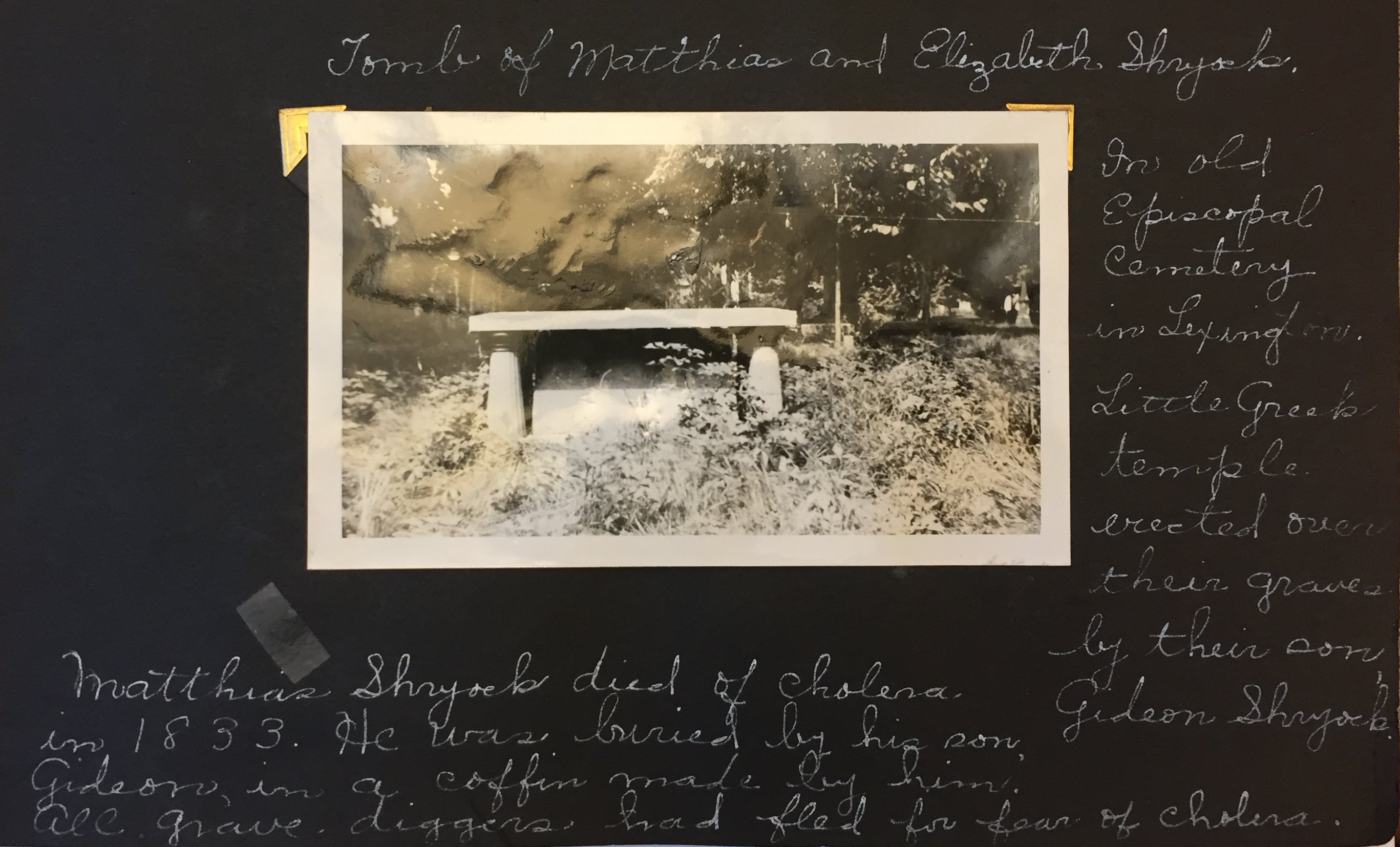 The photo above is part of a family photo album/scrapbook that was owned by the Shryock family. This is how the gravestone would have looked back around the 1920s. However, as you can see from the entry over at Find A Grave – it’s still standing!
If you suspect your ancestor may have perished in one of the many epidemics that swept portions of Kentucky throughout the 19th century, head over to our latest How-to on the National Library of Medicine’s Digital Collections for Genealogists. Librarian, Bill Burchfield, explores this amazing resource – which can include names of victims and life details that cannot be found anywhere else. Especially during a time when birth and death records were either nonexistent or very scattered throughout the state. 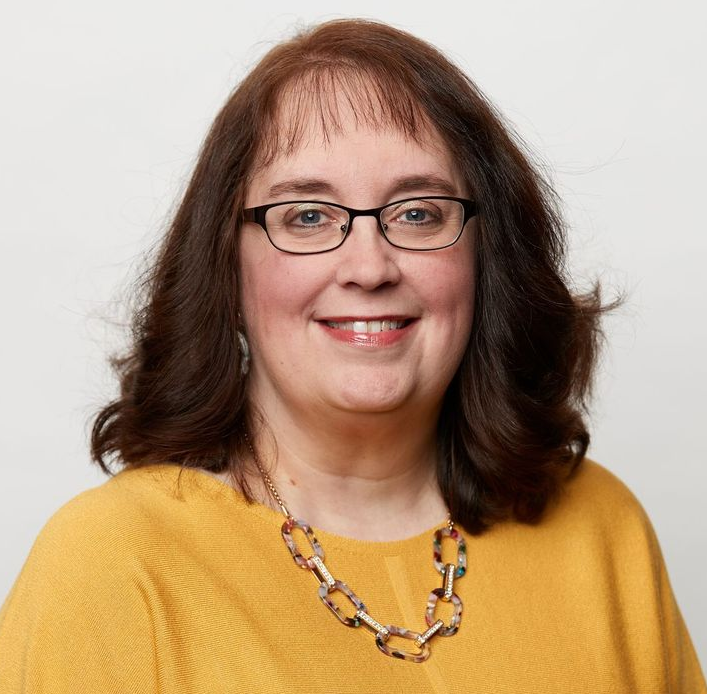 Cheri Daniels, MSLS, is the Head of Reference Services for the Martin F. Schmidt Research Library and Editor of Kentucky Ancestors Online at the Kentucky Historical Society. She holds a B.A. in History and an M.S. in Library Science, both from the University of Kentucky. For over 25 years she has worked in various types of libraries, including 11 years at the University of Kentucky, and 8 years at KHS. She is also a contributing author to the 2018 book from McFarland Publishers: Genealogy and the Librarian. Other roles include: DAR Member, blogger at Genealogy Literacy, Journeys Past, and speaker on the regional/national stage (FGS: 2017, NGS: 2012/2014/2019, RootsTech: 2014/2019/2020, Mysteries at the Museum: 2014, WTVQ Kentucky History Treasures: 2014, 2016)